Practical points - getting a Dog into the UK

UPDATE - as of 2013 P&O Ferries no longer allows foot passenger to bring dogs!!!

This blog is predicated on the idea that that travelling with a dog is easy.  The one exception is getting a dog into the UK.   Dogs cannot fly in the cabin into the UK.  They must go as cargo – which is a hassle and costs up to €1000 each way.  So the ferry is a better option.  This is a bit of a long post, but here goes:

We fly from Stockholm to Brussels, then take the TGV (high speed train) to Lille- Europe, transfer to Lille-Flanders and take the slow train to Calais-Ville.  From there we cross the English channel with P&O Ferries to Dover.  Then take the train to London.  If we’re lucky, we land when there is a high speed train to London (High Speed 1).   Otherwise we take the slow one.  There is also an option of taking a TGV directly from Brussels to Calais-Fréthun.  Calais-Ville is the main station in town and Calais-Fréthun is in the middle of a field and a 25minute cab ride away.

(You might ask – I thought the Eurostar runs directly from Brussels to London in 2 hours 9 minutes?  It does, but it doesn’t take dogs.)

There are other crossings  than Calais-Dover.   There are longer ferries between France and Spain and the UK as well as from the Netherland and Belgium.  Some of these claim to be dog-friendly; others are less so.  Also, not all ferry lines allow dogs with foot passengers and instead you are required to have a car and leave your dog in it.   So there are options, but crossing between Dover and Calais is probably the easiest (and certainly the fastest) crossing. And there are other upsides:

Lille-Europe and Lille-Flanders  stations are about 10minutes walking distances form each other (the Deutsche Bahn website suggests 20 minutes).  Between these two is a park, which is a perfect place to walk the dog.  Depending on which train combination you book, there is usually about an hour between trains, so just enough time to get a snack and get the dog some exercise. 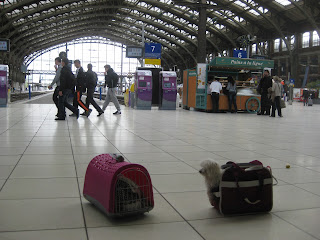 The ferry and dog situation itself can be a bit ridiculous.  Each time I’ve boarded (3x) the protocol has been different.  Sometimes they allow me to board with the rest of the foot passenges and I take Fritz below onto the car deck. (He has to stay here with the cars during the journey and can't be above with me). Other times I’ve been driven onto the car deck.  I STRONGLY suggest you book one of P&Os Pride class ferries – when you book it will be obvious.  I find the Spirit class too big and there are massive freight vehicles on the car deck and I just find it’s a bit scary.  On the Pride class the crew are really friendly and it’s a smaller, less overwhelming place.  Usually they let me stay with him until we leave the harbour.  Also, you need to have a hard crate because they put the dogs (in the crate) into a secure-ish trolley during the crossing. 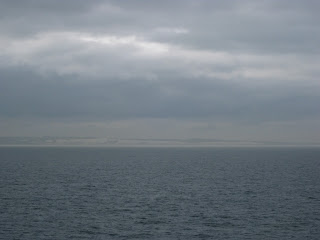 The overall point is that if you are planning a holiday, I would suggest one week in France, Belgium or Northern Spain and another week in the UK.  The other point is that I usually do this trip in 2 days (it’s easier) with a lay-over in Brussels but I’m hoping to do future lay-overs in Calais or Lille and explore them a bit more.
Eingestellt von Travels with Fritz um 06:51

Travels with Fritz
I am a researcher, living in Stockholm since 2011. Before that I lived in Geneva, London and Oxford and I am originally from the US. I travel loads for work and wanted to get a dog who could come along with me – and Fritz is a perfect travel companion. He is a Maltese, born in December 2011 to a Swedish mother and a Spanish father. He’s been travelling almost since he was born and together we are learning a lot about exploring Europe with a dog!